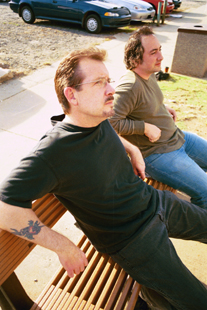 “These are old-fashioned protest songs at heart with a patina of new-coffeehouse folk (The Gourds)… and they deliver their messages. 8 of 10 stars.” –David Cowling, Americana UK

On a trio of releases beginning with their 2006 debut, Shannon (former leader of 4th Ward) and Tsikouras (Pat Metheny, Mamas and Papas) have recorded a voyage of emotional disintegration and redemption. The story is not unfamiliar, but the telling of it is original and universal. In Shannon’s eyes, we are trying and failing at life, at dreams, and finding a sort of unimagined grace in the wisdom it brings us. As he sings in “C’mon & Run,” the album’s anthemic closer, “you better have a big dream, baby / ’cause dreamers built this place / never think you’re it and the others are not / ’cause hatred has an ugly face.” The big dream, to Shannon, is a sort of battered salvation.

From “Wonderland,” a plain-spoken account of a family torn apart, to “Fried,” a tuneful lament of time’s march, to “Mary’s Spoken,” the acceptance of an inevitable end, Big Bus Dream perseveres in the face of disappointment. We are not defined by our setbacks, Shannon says, but they are always there. The big dream fuels and sustains us.

Big Bus Dream is about the distinctiveness of the song, the arrangement, the colors. Says Shannon, “People say when they hear our tunes they immediately know it’s us. That’s what original music should be about: sounding like no one else.”