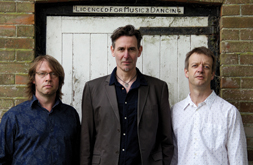 After a five-year layoff during which Luckett became a father (and honed his jazz and classical chops between midnight feedings), the band reunited under the guidance of engineer Mark Lord to create perhaps their most satisfying and eclectic set to date, By Chance. Fueled by Luckett’s growing recognition of the perilous state of the music industry, the album serves up both defiant anthems (“Cecilia Lane,” “Solid Ground”) and bittersweet postcards (“Alibi,” “Splendid Isolation,” “By Chance”) that find Luckett wondering just how much control he has over his artistic fate in 2014. And the answer? Not much.

Is there a silver lining? “An encouraging sign,” he says, “is the increasingly eclectic nature of people’s tastes. They’re less into genres now. They tend to ‘like what they like,’ which could be anything.”