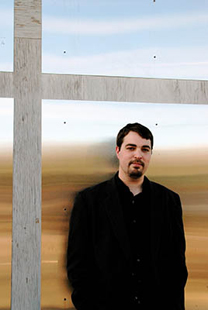 “February is an amazing album. This isn’t stuff you’ll hear on the radio, and it’s not written for mass commercial consumption, but it’s some of the most intelligent and powerful rock songwriting you’ll find.” —Wildy’s World

February is the sophomore release from Texas-based art-pop collective the matthew show. Sardonic yet compassionate, this tuneful, idiosyncratic work lands at the intersection of documentary and classic pop. Songwriter and producer Matthew Broyles, moved by the uncertain state of his and his friends’ lives, examines hope, regret, and fickle truth, leading lively interviews in pursuit of George Orwell’s “power of facing unpleasant facts.”

What emerges is a deft portrait of five adults on the cusp of middle age, each asking, “Is this all there is?” In reply, Broyles explores and exposes their lives in a patchwork of word and song. Calling on a stellar cast, he cajoles and enlightens, crafting a vivid and jarringly universal portrayal of contemporary life.

Wampus Multimedia · the matthew show – King of the Bastards