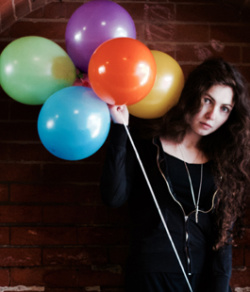 Ali Zagame is a Paris-born, Berklee-raised, Brooklyn-based singer-songwriter with a passing artistic resemblance to Regina Spektor — or maybe to a young Fiona Apple. If that sounds a bit like a fledgling pedigree, maybe it is. But Zagame’s blossoming career as a melodic-pop songbird and straight-shooter is hard-won. She isn’t mimicking syrupy dance tracks — she’s a single-minded artist with no intention of being swayed by expectations.

On her debut album, Brutally Honest, Zagame explores the arc and disintegration of a romantic relationship through tough, disarmingly pretty songs that showcase her strength and tenacity. “I’m going to feel this pain,” she calls out in “In Time,” the album’s upbeat closer, “and let it change me.” As an emerging artist with a clear point of view, she shows a colorful proclivity for stubbornness, truth, and candor. In a musical world of short-order cooks grinding out blue-plate specials, she is a chef: she’ll design the menu, thanks very much, and she’ll arrange the plate.

With influences ranging from Sanders Bohlke to Sóley, she serves up a diverse batch of sweet-spot alternative rock (“Proved Me Wrong,” “Opiates and Lullabies,” “Competition”), country-inflected indie pop (“Play for Blood”), and intimate, swinging jazz (“Honeybee,” “Masochistic”). The bittersweet title track finds her baring her universal interior: “Maybe I don’t want to cry… but tears and blood tell me I’m alive.” The scars are painful, but she’s done the math: hiding them isn’t doing anyone any favors.

Zagame’s songwriting is drawn from her own life as well as the experiences of others. “I found myself getting an idea, whether from a frustrating event or a line I’d heard, and letting it stew… For ‘In Time,’ I’d been going through something difficult with someone I’m close to. They’d called me on the phone and kept going on and on, and I was getting more and more frustrated… I got it in my head that no matter what they said, or how hurt I became, I wasn’t going to give in and let their words break me. So the line, ‘It won’t break me, you won’t get the satisfaction’ came to me. I let it sit with me for a while, and after a bit I went to the piano and let it all come out.”

With plans for live performances and more recordings, and a budding alter ego as a fiction writer, Zagame doesn’t intend to slow down anytime soon. As she explores the next song, the next possibility, the next waking dream, there is only acceleration.