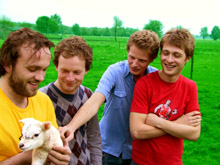 Brimming with darkly sweet pop hooks, Cafebar 401 blends Bowie-esque vocal presence with danceable grooves rooted in Euro-rock. Their relentlessly contemporary sound calls to mind Coldplay, Masters of Reality, Muse, Beck, Soulwax, Radiohead, and Queens of the Stone Age, but they bring something of their own to the party.

Leader Tije Oortwijn grew up listening to the Black Crowes, the Rolling Stones, and Masters of Reality. He first piloted grunge-driven bands during the mid-’90s. Gradually he absorbed his influences and concocted the shadowy pop confections of Cafebar 401. Combining the roar of alternative rock with the drum-and-bass of N.E.R.D., Timbaland, Daft Punk, Cassius, and Outkast, Cafebar 401 evokes a hipper Foo Fighters, a fun and funkier Bush.

But Cafebar 401 departs enough from their influences to cast a distinctive shadow. The first single, “I Need to Know,” is a blast of tuneful emo, a modern-rock power ballad cast as yearning band-and-strings lament. Bangers such as “Full-pro Disco!” and “2 am” augment frenetic dance tracks (“Something Worth Dying For”) and contemplative pop (“Troubles,” “Many Left Here Long Before”).

Oortwijn is a songwriter first, a craftsman of guitar and studio. He infuses his songs with a mix of celebration and sadness. “If the song isn’t powerful,” he says, “we throw it away.” Armed with a debut album that rocks hard and sticks like candy, Cafebar 401 could stick with you.